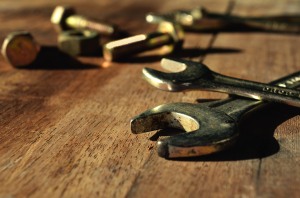 That’s how the saying goes. And when it comes to our writing, there are some contemptible practices we all need to familiarize ourselves with, if only so we can learn to spot and eradicate them. Get yourself on a first-name basis with these inherent flaws that worm their way into nearly every first draft, and you’ll be well on your way to fine-tuning your prose like an expert.

Wimpy verbs suck the energy from your writing. You can’t always cut them, but you can often find ways to change them and make them stronger. Weakness lurks in “to be” verbs like was, were, are, and is. Vague words used to describe emotions and thoughts are also weak, so be on the lookout for words like felt, feel, thought, and think. Many other verbs that don’t convey a specific thought, emotion or action are weak, so use went, looked, and seemed sparingly.

It often helps to think of weak verbs as those that have trouble standing on their own in a sentence. Take a sentence like, “The dog was barking.” Remove the modifier (barking) and you have “The dog was.” Not much of a sentence, is it? How about, “The dog barked?” Better!

Here are some examples of sentences with weak verbs:

Blah! Can you rewrite these with more active verbs? Here are some examples:

I yawned and stretched my heavy arms toward the sky.

The boy stamped his foot and shook his fists.

She smiled and hummed to herself.

Your rewrites will depend on the context of your story, but even these basic revisions give you an idea of the power strong verbs have to liven up your writing. In addition, weak verbs often tell us what a character is experiencing rather than painting a picture in our mind’s eye. We don’t want to be told that a character looks angry, we want to see him pitching a fit.

You won’t always be able to avoid wimpy verbs. In fact, rewriting them all could make your prose seem pretentious and wordy. But do use concrete, specific verbs whenever possible for effective writing and more potent storytelling.

I’ve got a Preposition for Ya

Don’t get tangled in strings of prepositional phrases. They make your writing confusing and less readable. Prepositions are positional and relational words—in, on, over, through. A prepositional phrase contains a preposition and modifies an object: in the house; on the table; over the bridge; through the tunnel.

When I’m editing, I find that the simplest preposition is one of the biggest offenders: of.

She brushed her locks of blond hair.

He had eyes of green.

Instead, trim the fat and write:

She brushed her blond hair.

He had green eyes.

The caravan crested the hill.

Adverb—those infamous –ly words—aren’t always evil. Sometimes they can be used to great effect. Just use them sparingly. (See what I did there?) It’s better to use strong verbs in the first place than to pump up the wimpy ones with adverbs.

Which version reads better to you?

The cat ran swiftly  OR  The cat darted

The boy cried mournfully  OR  The boy wailed

She ate rapidly  OR  She gulped her food

I yelled loudly  OR  I shrieked

Writers not only have grammatical tautologies to watch out for (close proximity, baby puppy, end result, necessary requirement), but we’re prone to repeating ourselves—we’ll say the same thing more than once using different words. (Which is what I just did with same thing and more than once. See how easy it is to do?) This not only happens on a sentence level, but can occur on a paragraph level, especially when we’re writing off the cuff. As you’re revising your drafts, it’s helpful to ask yourself, “Have I already conveyed this thought or idea?” If you can’t pick out the redundancies in an article or story you’ve written, try outlining paragraph-by-paragraph after the fact; the places where you’ve repeated yourself will become glaringly apparent.

Similes Overrun Your Story like Ants at a Picnic

Similes and metaphors can be wonderful creative tools, particularly when they enhance the theme of your story. Too many, however, will crowd your writing and look amateurish.

First, let’s make sure you know the difference between simile and metaphor. A simile compares two unlike things (similes overrun your story like ants), while a metaphor takes the risk of claiming that one thing is something else (similes are ants, overrunning your story.) It’s easy for similes to fall into cliché:

Metaphor is more direct and less likely to be problematic, although clumsy or inappropriate metaphors can detract from a story and leave your reader confused.

Try these little tricks to catch those soggy similes and mangled metaphors. First, ask yourself if the simile or metaphor is relevant to the theme of your story. If you’re writing a suspense thriller, avoid light, humorous similes that don’t match your tone. And don’t mix your similes and metaphors. If you’re saying that your villain tracks his victims with the dogged determination of a bloodhound don’t use the next paragraph to say that he hunts with the stealth of a jungle cat.

Familiarize yourself with these writing clunkers. Rattle around in them until you know their quirks. Once you’ve become intimately acquainted, you’ll be able to spot them when they show up in your early drafts. And they will show up, believe me. Once you know them, they pop up everywhere. The good news is, finding them is the first step toward sending them packing.

The original version of this article appeared in Fiction Fix ezine in 2000.

2 thoughts on “Six Ways to Tighten Your Writing”

Welcome! I'm Karen. I'm an intellectually curious creative who spends an inordinate amount of time in search of mental stimulation on the internet. I have thoughts. I write them down. Sometimes they're entertaining.